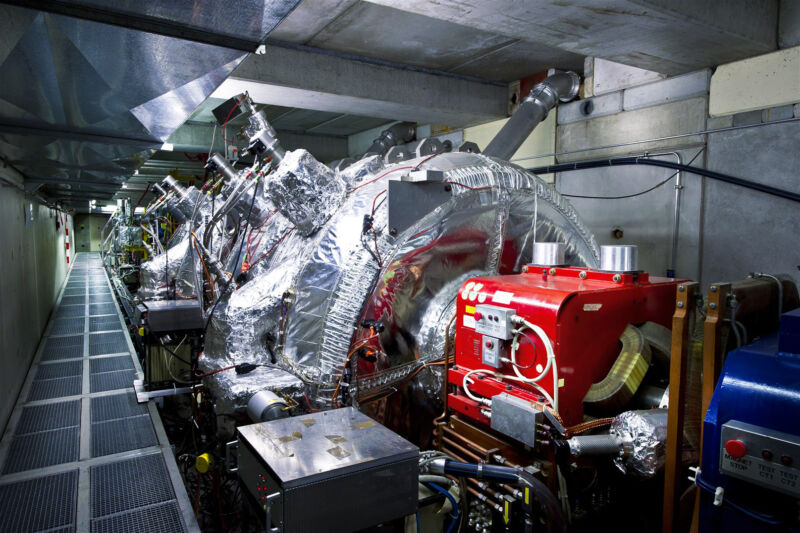 It’s possible that a new method of detecting the interactions between ordinary matter and exotic particles, such as antiprotons and unstable things like kaons or atoms that possess an odd quark, may be published in Nature on Wednesday. Asymmetry has allowed matter to dominate our Universe, but scientists still don’t know why. This work is likely beneficial.

But maybe the most interesting aspect of the study is how it gathered data. Researchers succeeded to set an antiproton in orbit around the nucleus of an atom of helium that had been cooled to the point where it became a superfluid, making it possible for them to conduct experiments. The light released by the antiproton’s orbital transitions was then measured by the researchers.

The obvious question is, why?
A accurate measurement of this kind of thing can be useful for a number of different reasons. Since antimatter and weird quarks have short half-lives and can only be generated in extreme conditions, the measurements will be very sensitive to these qualities. Antimatter and ordinary matter interact in this system, which can be difficult to record because of their violent outcomes. There are many fundamental features that may be discovered by studying interactions between atomic nuclei and objects in the orbitals around them.

The antimatter in this instance was an antiproton. Antiprotons are subatomic particles. It possesses a negative charge since it is the antithesis of a proton. It will occupy orbitals with precise energies surrounding the nucleus, but with a different shape from those inhabited by electrons from the viewpoint of the nucleus, making it appear like a morbidly fat electron. A photon can be absorbed or emitted by the antiproton to change its orbital.

Information regarding the interactions between the antiproton and the atomic nucleus is provided by the energy of the released photons. That’s what the scientists were looking for.

The fact that matter and antimatter are prone to annihilation was a huge obstacle, but it wasn’t the only one. The photon will often be red- or blue-shifted if the atoms being investigated move in any way. What should be a clear peak at a certain wavelength in a high-energy environment becomes an imprecise haze that fails to provide any helpful information.

Experimenting with a method that has failed before
In order to overcome this issue, it is necessary to chill the atoms, which is the most straightforward solution. When cooling helium enough, its atoms will move without losing energy to viscosity; this is known as superfluidity. Things might get worse as a result of this change. To conduct experiments like this in the past, researchers have focused on temperatures just above or just below where the liquid helium is at its most dense, which makes it a better choice than hydrogen, which would otherwise be a viable alternative.

The observations generated the large peaks typical of imaging samples that move around a lot, therefore those tests didn’t work out. There have been several hypotheses put up as to why the studies failed, but recent evidence points to a particular answer, which we’ll discuss more.

In any event, employing antiprotons that would otherwise be thrown away is part of the experimental setup. To create antihydrogen atoms, CERN is creating antiprotons, however only antiprotons with a specified energy may be used in this procedure. CERN will be left with a stream of moderate-energy antiprotons once the low-energy particles are sent to another experiment. In the experiments, this beam was employed.

In liquid helium, part of the helium atoms had lost one of their two electrons, so the antiprotons were directed there. Antiprotons can enter orbit, generating a neutral atom-like structure for the brief moment before colliding with matter and dissipating in a puff of energetic gas.

Of course, it’s not as easy as that. Upon arrival, the antiprotons will have a significant amount of energy and will end up in a faraway orbital. Because they are so far away, their orbitals are not included in the electron cloud that contains the lone surviving electron. Because of this, they’re in risk of being obliterated by ordinary stuff. As a result, the antiprotons must fast lose their energy in order to enter the electron cloud. As the antiprotons and helium interacted, the scientists kept an eye out for photons. A few orbital transitions were detected, indicating that the energy loss was going place at a respectable rate. One of such transitions was the subject of the authors’ remaining measurements.